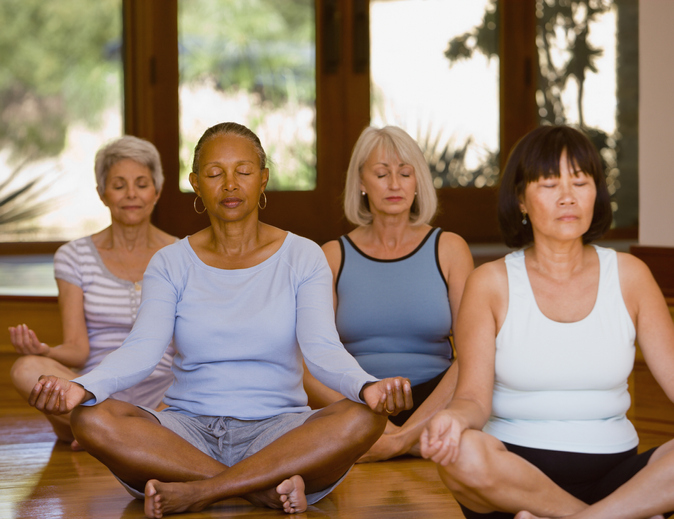 Sixty-six days. That’s what it takes to make or break, a habit. So why not focus that time on building not just good, but great habits? We’d all like to feel better, both physically and mentally but often it seems an arduous task- where does one start? Quite simply, with meditation. You’re probably picturing crystals, tie-dye and all sorts of weird paraphernalia but everything you need to master that practice of meditation is right in front of you. And yes, meditation is a practice, it cannot be mastered in a couple of hours, it takes time and dedication but delivers beautiful rewards.

Practicing meditation is the first step in moving beyond medication as a way to treat any ailment; meditation opens you up to a holistic view of your well-being; it is a tool.  Studies have shown that meditation as part of a treatment plan has many health benefits for treating disease and mood disorders.

Meditation is a tool to control and calm the mind, and in turn the body. As Dr Stephanie Cheng, Geriatric Specialist describes it, “meditation is an antidote to the fight-or-flight response”. Fight or flight is our brain and body’s natural response to stress or threat- either you tackle the enemy (fight) or you flee to safety (flight). Both of these responses are automatic and are controlled by the oldest part of our brains referred to as the Reptilian brain; this is the part of the brain which governs our base or animal reactions and behaviours. When we are faced with danger, we don’t have to take a few minutes to ponder our exit strategy- the Reptilian brain is a hundred steps ahead of us and is already prepping the body to fight or flee. In a situation like this, two vital hormones, adrenaline and cortisol are released into the bloodstream to ready us for the challenge ahead. The brain’s principal goal is to keep us alive and out of danger, however in today’s modern world, our fight-or-flight response is often misplaced. We no longer need to wrestle with a sabre-tooth tiger or outrun a wild boar; but nevertheless, our brain still reacts in the same way in a stressful situation.

The question is, how can we manage this stress? We all know that although stress is considered an emotional state, it has very real and tangible effects on the physical body. We are happy to use medicines to treat illness and disease and we often overlook the simple measures. Meditation is a simple measure. As Dr Cheng describes it, meditation slows the breath down, as well as the heart rate and with that blood pressure decreases and in turn stress decreases resulting in better digestive functioning and an overall decrease in tension.

There is no downside to meditation, and it is an aid to both young and old. Meditation does not discriminate based on economics, physical ability or lack thereof. Anyone can do it. So how and where do we begin? First of all, let’s look at the benefits backed by studies. Through her experience Dr Cheng has only seen positive changes in her patients who have embarked on their meditation practice, with some of her patients being able to reduce their medication, as well as other benefits such as a decrease in blood pressure and with patients reporting lowered stress levels. Cheng has also seen the change in the disposition of many of her patients, as she says: “One thing I see commonly is people noticing the blessings and abundance in their lives. It increases gratitude for what they have. And there’s some data around improving coronary artery disease outcomes and helping with post-traumatic stress disorder, chronic pain and headaches.”

What’s even more encouraging is that meditation has positive effects on everyday problems experienced by many such as IBS (Irritable Bowel Syndrome), anxiety and insomnia (National Center for Complementary and Integrative Health, USA) and memory function (Jean Lengenfelder)

A 2014 review of several studies of elderly adults also suggested that meditation had potential positive effects on their attention span and memory, their executive brain function as well as processing speed and general cognition.